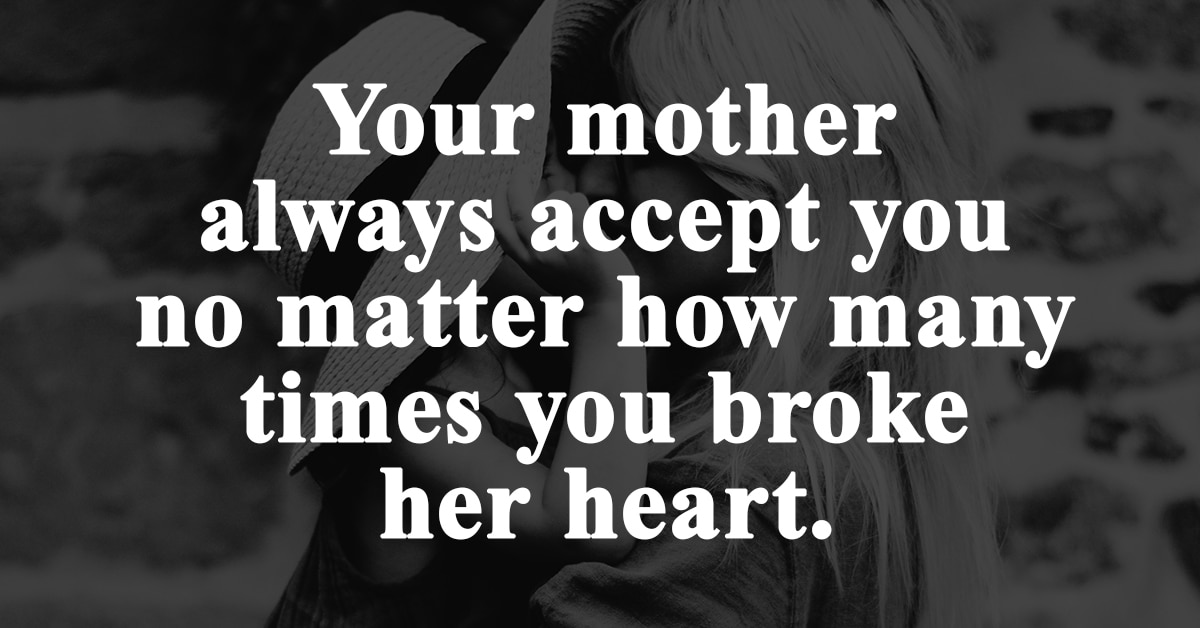 Your mother will always accept you no matter how many times you broke her heart.

A mother thinks about her children day and night, even if they are not with her and will love them in a way they will never understand.

God could not be everywhere, and therefore he made mothers.

Only mothers can think of the future – because they give birth to it in their children.

Motherhood: All love begins and ends there.

We are born of love; Love is our mother.

That strong mother doesn’t tell her cub, Son, stay weak so the wolves can get you. She says, Toughens up, this is a reality we are living in.

Mothers are great. They outlast everything. But when they’re bad, they’re the worst thing that can happen.

Sometimes the strength of motherhood is greater than natural laws.

It may be possible to gild pure gold, but who can make his mother more beautiful?

The love of a mother is the veil of a softer light between the heart and the heavenly Father.

Mother is the name for God in the lips and hearts of little children.

A child’s first teacher is its mother.

If evolution really works, how come mothers only have two hands?

All women become like their mothers. That is their tragedy. No man does. That’s his.

I am sure that if the mothers of various nations could meet, there would be no more wars. – E. M. Forster

Mothers all want their sons to grow up to be president, but they don’t want them to become politicians in the process.

The truth is that no matter how old we are, as long as our mothers are alive, we want our mother. And it’s a very powerful relationship if it’s healthy.

Mothers are the only ones that think nothing is beyond their control when it comes to their children.

A mother’s arms are made of tenderness and children sleep soundly in them.

In a child’s eyes, a mother is a goddess. She can be glorious or terrible, benevolent or filled with wrath, but she commands love either way. I am convinced that this is the greatest power in the universe.