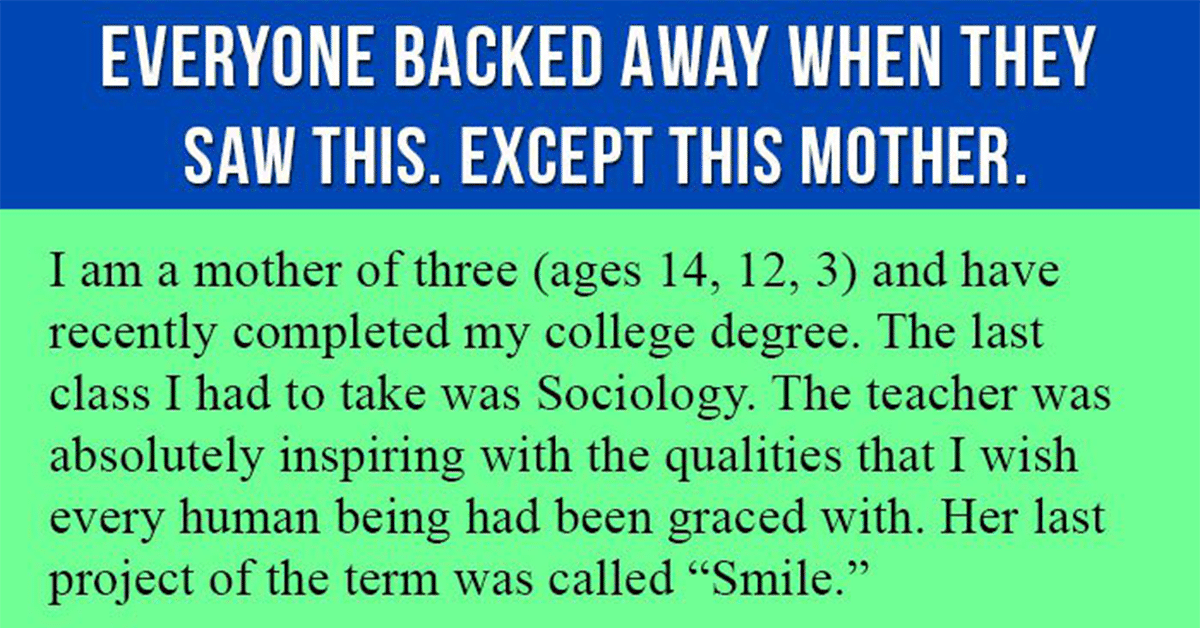 
This story is a proof that a single smile can make a difference in someone’s life. One mother was about to complete the last assignment for her sociology class before she graduated. Interestingly enough, it didn’t require nights of studying or writing a bunch of essays, but simply to smile to complete strangers and see what happens.

See how this incredible story goes below.

I am a mother of three (ages 14, 12, 3) and have just completed my college degree. The last class I had to take was Sociology. The teacher was absolutely inspiring with the qualities that I wish every human being had been graced with. Her last project of the term was called “Smile.”

The class was asked to go out and smile at three people around and document their reactions. I am a very friendly person and always smile at everyone and say hello anyway…..so, I thought, this would be a piece of cake, literally.

Soon after we were assigned the project, my husband, youngest son, and I went out to McDonald’s, one crisp March morning. It was just our way of sharing special play time with our son. We were standing in line, waiting to be served, when all of a sudden everyone around us began to back away, and then even my husband did. I didn’t move an inch … I felt overwhelming panic as I turned to see why they had moved.

As I turned around I smelled “dirty body” smell…and there standing behind me were two poor homeless men. As I looked down at the short gentleman, close to me, he was “smiling.” His beautiful sky blue eyes were full of God’s Light as he searched for acceptance.

He said, “Good day” as he counted the few coins he had been clutching.

The second man fumbled with his hands as he stood behind his friend. I realized the second man was mentally deficient and the blue eyed gentleman was his salvation. I held my tears….as I stood There with them. The young lady at the counter asked him what they wanted.

He said, “Coffee is all Miss” because that was all they could afford to sit in the restaurant and warm up, they had to buy something…he just wanted to be warm. Then I really felt it…the compulsion was so great I almost reached out and embraced the little man with the blue eyes. That is when I noticed all eyes in the restaurant were set on me…judging my every action. I smiled and asked the young woman behind the counter to give me two breakfast dishes on a separate tray

I then went to the corner of the table where the men had chosen to rest. I put the tray on the table and put my hand on the cold hand of the cold-eyed man.

He looked up at me, with tears in his eyes, and said, “Thank you.” I leaned over, began to pat his hand and said, “God is here working through me to give you hope.”

I walked in tears to join my husband and son.

When I sat down my husband smiled at me.We held hands for a while and at that time we knew that we could only give because of the grace given to us. We are not churchgoers but we are believers. That day showed me the pure Light of God’s sweet love.

I returned to college, on the last evening of class, with this story in hand.

I turned in “my project” and the instructor
The class was asked to go out and smile at three people around and document their reactions. I am a very friendly person and always smile at everyone and say hello anyway…..so, I thought, this would be a piece of cake, literally.read it….then she looked up at me and said, “Can I share this?”

I slowly nodded and she read it to the class.

In my own way I had touched the people at McDonald’s, my husband, son, instructor, and every soul that shared the classroom on the last night I spent as a college student. I graduated with one of the biggest lessons I would ever learn….UNCONDITIONAL ACCEPTANCE.

Much love and compassion sent to each and every person who may read this.

Learn how to LOVE PEOPLE AND USE THINGS – NOT LOVE THINGS AND USE PEOPLE.