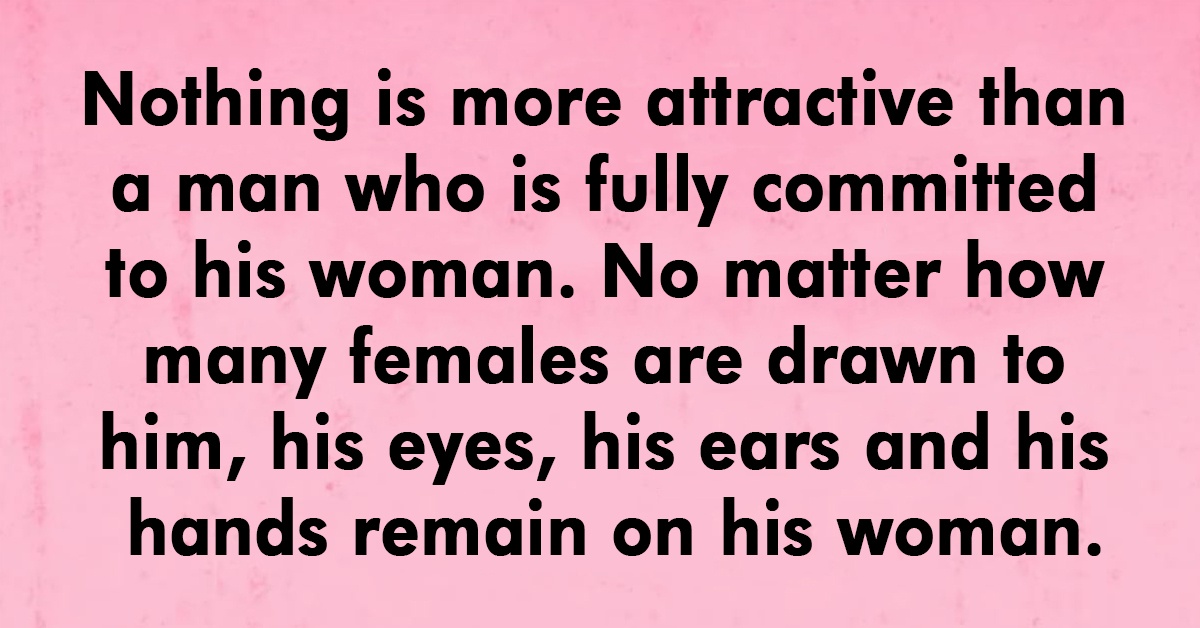 
When a man grows up he fully understands the worth of a woman. He doesn’t lie to her, cheat on her, play games with her heart, put her down or makes her feel unappreciated. Instead, he cherishes her, respects her, loves putting a smile on her face, honors her, stays fully committed to her.

7 Things Men ONLY Do With The Woman They Love

Women love to talk about love, expecting their guy to say “I love you” as often as they do. But they are often disappointed. The average guy would rather roll around in poison ivy than talk about his feelings. Men don’t want to talk about their relationships with anyone, even the women they love.

This doesn’t mean he doesn’t love you, deeply and completely. It’s possible he has never said “I love you” to anyone in his entire life. If he loves you, he’ll eventually say the words.

Until then, look at his actions. To a guy, actions are what matter, not words. We did a little research and uncovered seven common behaviors that show he’s in love, even without the words.

1. He’s willing to sacrifice for you

A man in love wants to do all he can to make his lady happy and is willing to make great sacrifices for her. In a fulfilling and lasting relationship, each gladly sacrifices for the other.

When your man does something for you, whether it’s something grand or doing the dishes, he’s telling you he loves you. Sacrificing for the one you love is selfless and takes maturity. It shouldn’t be a one-way street.

2. He respects your friends and family

When a man loves you, he respects the other relationships that are important to you. This doesn’t mean he’ll like all of those people, but he’ll be civil and show respect. He does not want unnecessary conflict with others to damage his relationship with you.

3. He loves you even with bad hair and stained jeans

You’ve probably tried 16 outfits before your first date and continue to always look your best as time went on. At some point, when you begin spending more and more time together, the day comes when you just look awful. Perhaps you’re sick or simply tired and sweaty.

It does not matter to a man in love. He accepts you and loves you however you look. Men celebrating their 50th wedding anniversary have often said, “She looks as beautiful to me now as on the day we met.” Men appreciate the efforts their woman makes to look good but love the real woman under the pretty dresses and makeup.

Women generally listen better than men. If your guy really listens to you, he’s a keeper. This is especially true if he doesn’t give his full attention to many people. This can be demonstrated in many ways.

If you’ve said you love lilies but aren’t fond of roses and he gives you lilies for Valentine’s Day, he heard what you said. If he remembers you talking about something you’ve always wanted to do and makes it happen, he’s deeply in love.

5. He’s not afraid to show his vulnerability

Men do not like to expose their vulnerabilities. It may be genetic, but men generally want to be strong all the time. This may be why so many people guys put off going to the doctor as long as possible and make terrible patients.

One of the truest signs of a man’s love is when he begins to expose his inner feelings and what he considers weaknesses. This shows that he really trusts you above all others. It may take quite a while before this happens, but let his guard down is a true sign of love. (Don’t ever betray this trust – it could destroy the relationship.)

If your guy doesn’t stick up for you, this does not always mean he does not love you. Sometimes a guy thinks it’s family or friend drama and you don’t need his help. However, when it’s important, a man who loves you will stick up for you and always have your back.

7. He brags about you

If you have ever heard a man brag about his lady, you can be sure that he really loves her. He is proud of the woman he loves. When he tells a friend about how smart you are, how great you cook or what a wonderful mom you are, he’s saying “I love you and I’m proud of you.” Treasure these words. Be proud of him also.

Does your man display any of these seven signs? These are acts of love. He may never say “I love you” as often as you wish, but he will let his actions speak for him. If the man you love shows all seven, he could be “the one”.