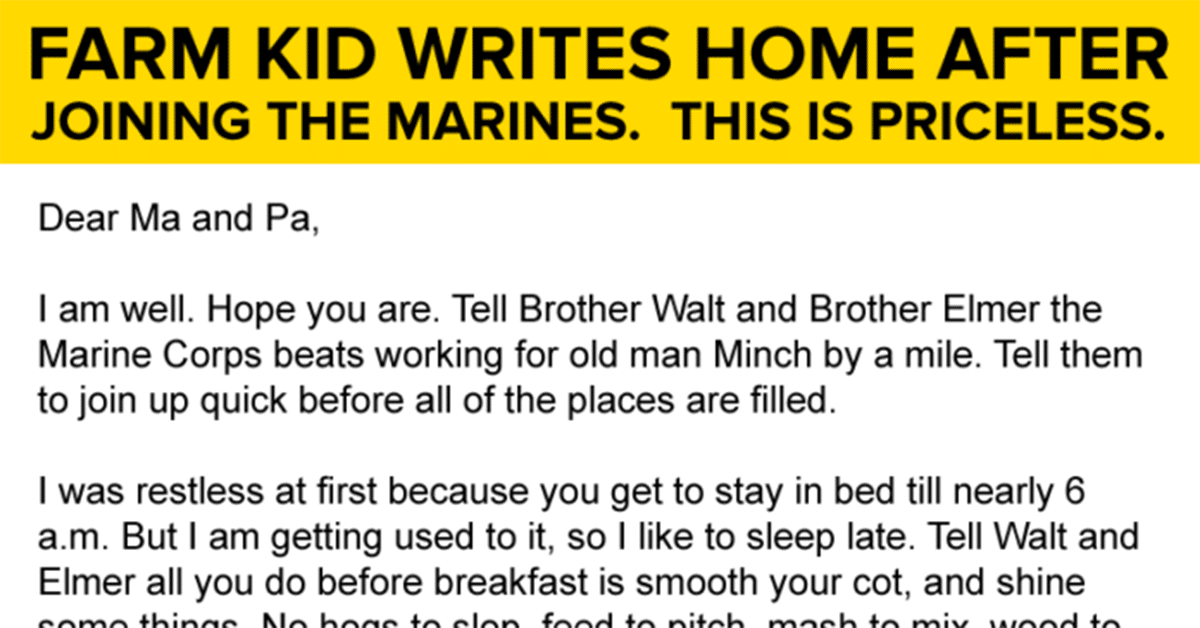 
Their kid joined the marines and the parents were anticipating a letter in order to know how their child was doing. When they finally received one it quickly went viral. This is definitely a must read!

I am well. Hope you are. Tell Brother Walt and Brother Elmer the Marine Corps beats working for old man Minch by a mile. Tell them to join up quick before all of the places are filled.

I was restless at first because you get to stay in bed till nearly 6 a.m. But I am getting used to it, so I like to sleep late. Tell Walt and Elmer that before breakfast, you just need to smooth your bed and make some things shine. No pigs to drag, bad luck feed, porridge to mix, wood to split, fire to lay. Virtually nothing.

Men got to shave but it is not so bad, there’s warm water here. Breakfast is strong on trimmings like fruit juice, cereal, eggs, bacon, etc., but kind of weak on chops, potatoes, ham, steak, fried eggplant, pie and other regular food, but tell Walt and Elmer you can always sit by the two city boys that live on coffee. Their food, plus yours, holds you until noon when you get fed again. It’s no wonder these city boys can’t walk much.

We go on “route marches,” which the platoon sergeant says are long walks to harden us. If he thinks so, it’s not my place to tell him different. A “route march” is about as far as to our mailbox at home. Then the city guys get sore feet and we all ride back in trucks.

The sergeant is like a school teacher. He complains a lot. The captain is like the school board. The majors and the colonels are content to roll around and frown. They don’t bother you

This next will k.i…l….l Walt and Elmer with laughing. I keep getting medals for shooting. I don’t know why. The bulls-eye is near as big as a chipmunk head and don’t move, and it ain’t shooting at you like the Higgett boys at home.All you have to do is lie down comfortably and hit it. You don’t even load your own cartridges. They come in boxes.

Then we have what they call hand-to-hand combat training. You get to wrestle with them city boys. I have to be real careful though, they break real easy. It ain’t like fighting with that ole bull at home. I’m about the best they got in this except for that Tug Jordan from over in Silver Lake . I only beat him once. He joined up the same time as me, but I’m only 5’6″ and 130 pounds and he’s 6’8″ and near 300 pounds dry.

Be sure to tell Walt and Elmer to hurry and join before other fellers get onto this setup and come stampeding in.

Boom! Marine, farm kid, and a young girl? Doesn’t get much tougher than that.