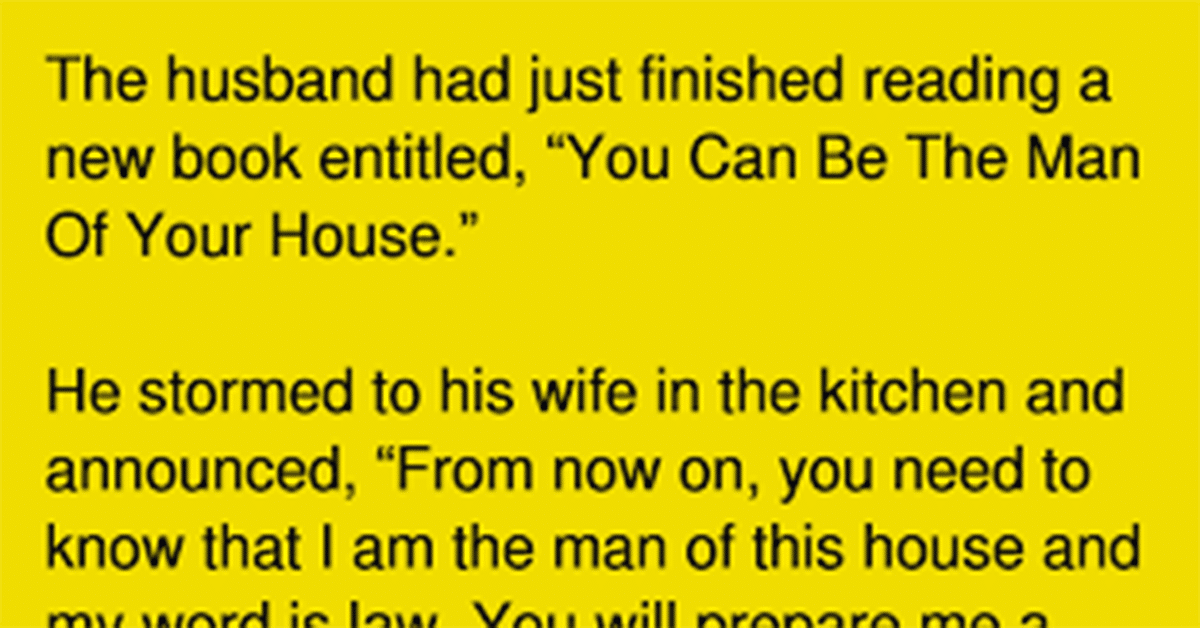 The husband had just finished reading a new book entitled, “You Can Be The Man Of Your House.”

He stormed to his wife in the kitchen and announced,

“From now on, you need to know that I am the man of this house and my word is law. You will prepare me a gourmet meal tonight, and when I’m finished eating my meal, you will serve me a sumptuous dessert. After dinner, you are going to go upstairs with me and we will have the kind of fun that I want. Afterwards, you are going to draw me a bath so I can relax. You will wash my back, towel me dry, and bring me my robe. Then, you will massage my feet and hands. Then tomorrow, guess who’s going to dress me and comb my hair?”

The wife replied, “The da..m..n funeral director would be my first guess.”

An elderly lady decided to celebrate her 70th birthday by spending the night in an expensive hotel. When she left the next morning, the receptionist gave her a $250.00 bill. She exploded and wanted to know why the charge was so high.

“It’s a nice hotel but the rooms certainly aren’t worth $250.00 for just an overnight stay! I didn’t even have breakfast.” The clerk told her that $250.00 is the ‘standard rate’, so she insisted on speaking to the Manager.

The manager appeared and was announced by the front desk: “This hotel has an Olympic size pool and a large conference center, available.” “But I did not use it,” she says. “Well, they are here and you could have,” explained the manager.

He further stated that she may have seen one of the hotel’s shows for which the hotel is famous. “We have the best artists in the world here,” said the director. “But I did not attend any of these shows,” she said.

“Well, we have them and you could have,” replied the manager. Regardless of the arrangements mentioned by the manager, she replied: “But I did not use it!” And the manager responded with his standard answer. After a few minutes of discussion with the manager, she decided to pay, wrote a check, and gave it to him. The manager was surprised when he looked at the check.