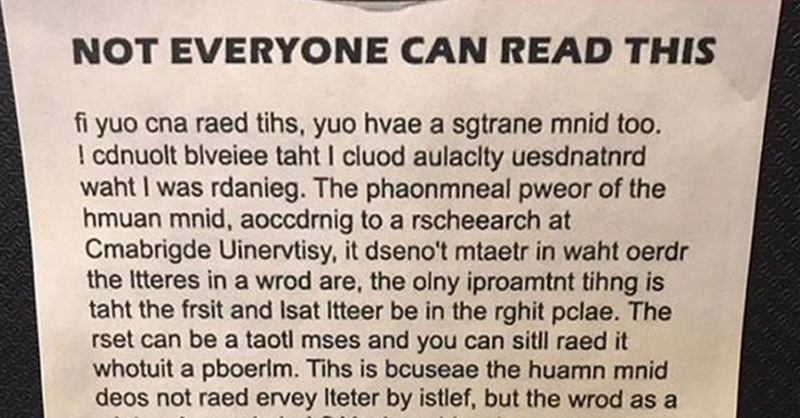 A POSTER is dividing the web as it claims only 55 per cent of the population will be able to read it.

Shared on Twitter by American author Joel Comm, at first the poster appears to be a muddle of letters, but over half of us should be able to make sense out of it. The letters in each word have been scrambled with only the first letter and the last remaining the same.

And while most of us should be able to read it, some will struggle. So can you figure out what it says?

Unscrambling the letters, the poster reads: “If you can read this you have a strange mind too. I couldn’t believe that I could actually understand what I was reading.

“The phenomenal power of the human mind, according to research at Cambridge University, it doesn’t matter what orders the letters in a word are, the only important thing is that the first and last letter be in the right place.

“The rest can be a total mess and you can still read it without a problem.

“This is because the human mind does not read every letter by itself but the word as a whole. Amazing huh?

“Yeah and I always thought spelling was important! If you can read this share it.

Matt Davis, a senior research at Cambridge’s Cognition and Brain Science Unit, says that there is some truth to the claims.

Speaking to MNN he said: “We know from research in which people read words presented very briefly on a computer screen that the exterior letters of words are easier to detect than middle ones.”

However, Matt says that the more jumbled the centre letters become, the more we will struggle to read them.

He adds: “”Clearly, the first and last letter is not the only thing that you use when reading text.

“If this really was the case, how would you tell the difference between pairs of words like ‘salt’ and ‘slat.’”