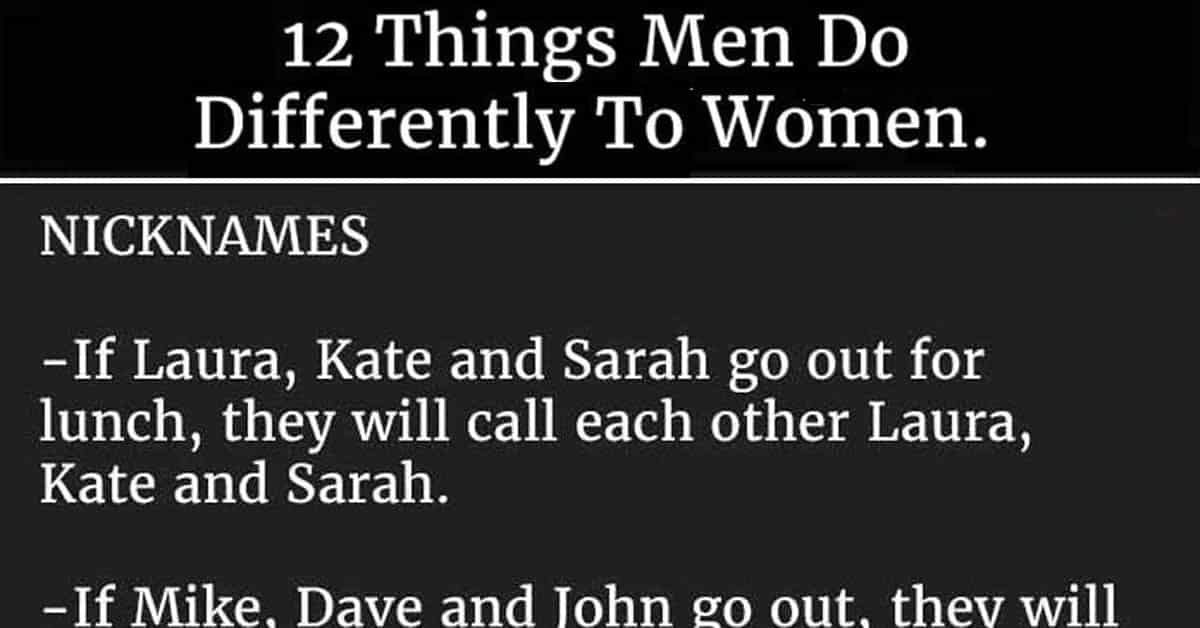 If Mike, Dave and John go out, they will affectionately refer to each other as Fat Boy, Godzilla and Four-eyes.

When the bill arrives, Mike, Dave and John will each throw in $20, even though it’s only for $32.50. None of them will have anything smaller and none will actually admit they want change back.

When the girls get their bill, out come the pocket calculators.

A man has six items in his bathroom: toothbrush and toothpaste, shaving cream, razor, a bar of soap, and a towel.

The average number of items in the typical woman’s bathroom is 337. A man would not be able to identify more than 20 of these items.

A woman has the last word in any argument.

Anything a man says after that is the beginning of a new argument.

A woman worries about the future until she gets a husband.

A man never worries about the future until he gets a wife.

A woman marries a man expecting he will change, but he doesn’t.

A man marries a woman expecting that she won’t change, but she does.

A successful man is one who makes more money than his wife can spend.

A successful woman is one who can find such a man.

A woman will dress up to go shopping, water the plants, empty the trash, answer the phone, read a book, and get the mail.

A man will dress up for weddings and funerals.

Men wake up as good—looking as they went to bed.

Women somehow deteriorate during the night.

Ah, children. A woman knows all about her children. She knows about dentist appointments and romances, best friends, favorite foods, secret fears and hopes and dreams.

A man is vaguely aware of some short people living in the house.

A married man should forget his mistakes.

There’s no use in two people remembering the same thing!

The post 12 Things Men Do Differently To Women. appeared first on Wake Up Your Mind.